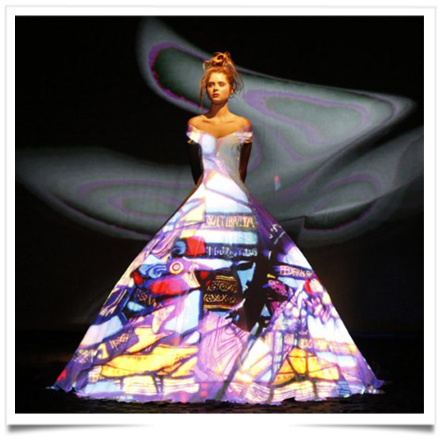 Franck Sorbier’s fashion shows are always a exceptional and magic moment. In 2013, the poet, Franck Sorbier, has choosen to reinterpret the tale of “Peau d’Ane”. There is some Magic in the Telling … “Discovering the Dreamer of Franck Sorbier”.

Haute Couture is a land that imagination forgot. Many will speak of it as legend or as fantasy or even as mythology. And that is perfectly fine. We have no objection. However, Haute Couture is a real fact of life.

And, as you cross the Bridge of Belief, as you imagine yourself lifting out of the logic and out of the reason of the consensus reality, moving beyond time and space and beyond time-space, you can find that that land is and has been forgotten by the imagination.

As one were to approach the catwalk, it would be located in the Pacific Ocean, far from other land masses, to be sure. And one would note first what seemed to be a cloud or a mist that seemed to hang low over the ocean. And out of that mist would poke mountain peaks that would be black rock … very dark, very black, like coal almost, almost shiny against the soft mist.

Indeed, as one would be flying over it in one’s journey beyond the Bridge of Belief, one would perhaps miss it quite entirely, because all that would seem to be there was this innocuous sort of mist, with these mountain peaks that seemed to be sticking through. But as you would descend into that mist toward those black mountain peaks into what seems to be a black-and-white reality against the otherwise blue sea, you would emerge beneath the mist and see before you a most glorious land. It was a huge island, an island so large that people could live and die upon it without ever knowing they were on an island.

The water would be bluer than any blue that you have ever seen. An aquamarine blue, a midnight blue, a steely blue, a soft turquoise blue — all kinds of blues, motley shades changing from one hour to another during the day. And along the shore would be the most beautiful sandy beaches. The sand was an almost white sand, almost a glistening sand, almost sparkling. At first you might think it was made of grains of diamond rather than grains of silica.

The Magic Land of Franck Sorbier is  The Mystic Land of dreams, and those that would go there will only be those who will be called. Only those who, in their dreams or in their fashion explorations, will be entreated to come would venture there.

It was absolutely breathtakingly beautiful. Now a Dreamer is a very special kind of person, who could dream other people’s dreams. If you could find a Dreamer, you could tell them what you wanted them to dream, and they would dream your dreams for you like Franck Sorbier.

A juxtaposition of opposites, of paradoxes, is often what the Dreamer looked like. Franck Sorbier is a contradiction and a combination of real pure dreamer. We dream in peace, Franck…