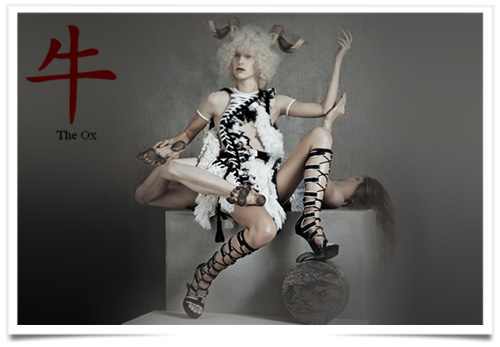 China has a sumptuous history filled with legend and traditions. Folklore suggests that the Chinese Zodiac was born when the Jade Emperor of China summoned animals from across the globe to help restore the world to order.

The Shēngxiào, literally “birth likeness”, is also known in English as the Chinese zodiac. Zodiac derives from the similar concept in western astrology and means “circle of animals”. It is a scheme and systematic plan of future action that relates each year to an animal and its reputed attributes according to a 12-year cycle, and it remains popular in several East Asian countries including China, Vietnam, Korea and Japan.

This season, designers have consulted a higher power from the stubborn and patriotic Ox adorned in Dolce & Gabbana. The athletic horse comes corseted by Christian Dada and the agile, suited tiger wears Givenchy’s moody florals.