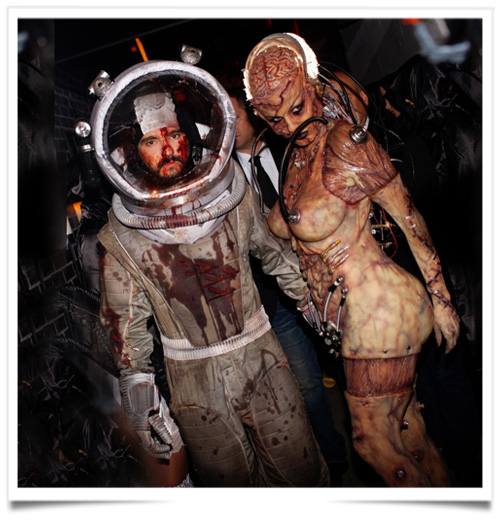 In the 20 years that Heidi Klum has hosted her annual Halloween party, the infamous “queen of Halloween” has always kept spectators guessing what outlandish costume she’s going to wear.

This year, Klum gave fans a peak at her Halloween transformation, camping out at the 34th Street Amazon Books store’s windowfront all day Thursday where spectators witnessed the hours of makeup and prosthetics applications that transformed the German model into what she later explained as a bionic alien.

Klum’s grand entrance began at precisely 11:23 p.m., where she arrived at the new Cathédrale Restaurant in East Village with husband Tom Kaulitz in a hazmat truck. On the red carpet, she hissed and clawed at cameras, showing off her costume’s organ-like prosthetics, stitching and wires.

The party also drew in a number of fashion designers, including Joseph Altuzarra, who with husband Seth Weissman dressed as “leather daddies” in anticipation of becoming fathers in three weeks, and The Blonds designers David and Phillipe Blond, who dressed as Batman and Catwoman, respectively.