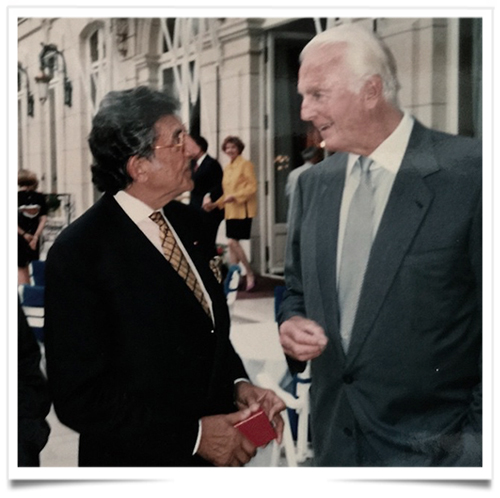 Count Hubert James Marcel Taffin de Givenchy was a French fashion designer who founded The House of Givenchy in 1952. He was famous for having designed much of the personal and professional wardrobe of Audrey Hepburn and clothing for Jacqueline Bouvier Kennedy.

With his perfect manners and old-school discipline, Givenchy had a distinguished presence that colored the fashion industry for over fifty years. A consummate collector with an perfect eye for objects as well as for interior decoration of houses, he leaves behind a fashion house that defined the very notions of refinement and elegance.

Under the ownership of luxury conglomerate LVMH since 1988, the house of Givenchy issued a statement paying homage to its founder, “a major personality of the world of French haute couture and a gentleman who symbolised Parisian chic and elegance for more than half a century.”

Givenchy retired from fashion design in 1995. His successor to head the Givenchy label was John Galliano. After a brief stint by Galliano, a five-year stay from Alexander McQueen and a term from 2001 to 2004 by Julien Macdonald, Givenchy women’s ready-to-wear and haute couture was then headed by Riccardo Tisci from 2005 until 2017

Bernard Arnault, chairman and chief executive officer of LVMH said he was “deeply saddened” by Givenchy’s death. Givenchy is survived by his partner, Philippe Venet, his nieces and nephews, and their children. His family plans a private funeral and requested that instead of flowers, donations be made to Unicef in his name.