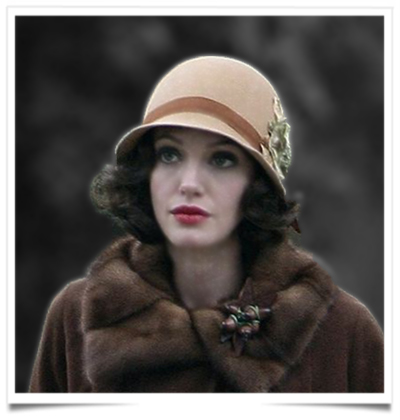 The cloche hat is a fitted, bell-shaped hat that was popular during the 1920s, but was first founded in 1908 and continued to be popular until 1933. Cloche is the French word for “bell”.

Cloche hats were usually made of felt so that they conformed to the head. The hat was typically designed to be worn low on the forehead, with the wearer’s eyes only slightly below the brim. By 1928/29, it became fashionable to turn the brims on cloche hats upwards. This style remained prevalent throughout the early 1930s until the cloche hat became obsolete around 1933/34.

Often, different styles of ribbons affixed to the hats indicated different messages about the wearer. Several popular messages included: An arrow-like ribbon which indicated a girl was single but had already given her heart to someone, a firm knot which signaled marriage or a flamboyant bow which indicated the wearer was single and interested in mingling. Cloches were made of beads or lace for evening wear, for cocktails, dancing or even for bridal wear.

Couture houses like Lanvin and Molyneux opened ateliers to join milliners in manufacturing the hats. The hats even shaped hairstyles: the Eton crop (the short, slicked-down cut worn by Josephine Baker) became popular because it was ideal to showcase the hats’ shape.