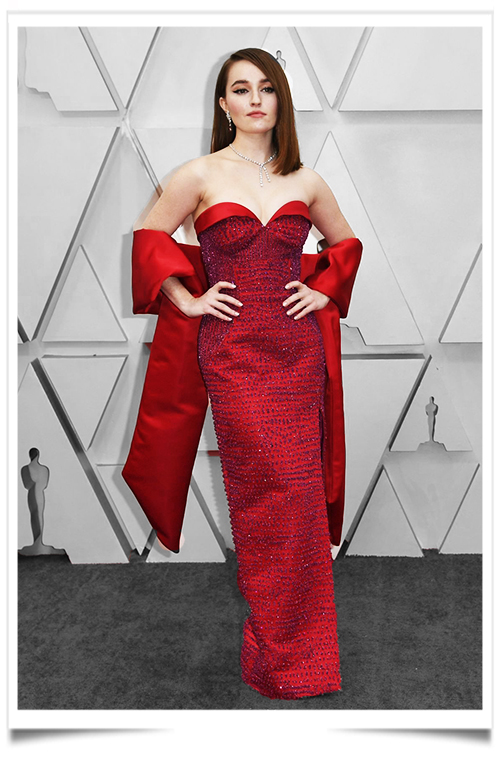 Kaitlyn Dever in a custom red Louis Vuitton strapless gown and stole made of GOTS (Global Organic Textile Standard) Taroni silk-satin embroidered with red-blue beads at the Vermont Atelier in Paris, certified according to the Oeko-Tex Standard 100 and approved by the Red Carpet Green Dress organization. Who knows what all that gobbledy-greengook means exactly, but it sounds good coming from a brand whose parent LVMH has faced criticism for not signing the United Nations&#039; fashion industry charter for climate action.

Louis Vuitton designer Nicolas Ghesquière has had a banner red-carpet season, no doubt about it. On Sunday, he also dressed Lea Seydoux using certified ivory silk, and a new wood fiber textile developed by Tencel Luxe that will hit the market this May.

When you think about it, it’s tragic, but it’s part of the human condition. We really wasted our planet in a way, said Seydoux during a fitting at the Chateau Marmont earlier in the week, when the street was closed off so Oscars sponsor Cadillac could crane in a 2021 Escalade to sit poolside for a cocktail bash.

“We have to rethink how we consume,” added the actress, set to reprise her role as Madeleine Swann in the upcoming Bond film, before asking for recommendations for Los Angeles vintage shops.