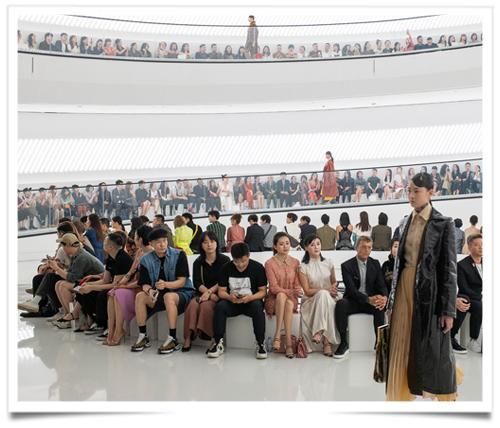 It’s been 12 years, since Fendi last held a show in China. In 2007, it was a show-stopping spectacle held atop the Great Wall. On Friday evening, the brand returned to the country to stage its first co-gender show, although with a very different tact.

The location of tonight is the Powerlong Museum, where a slick futuristic winding ramp that spread over multiple floors acted as the runway, recalling the spiral interior of the Guggenheim.

Actor Timmy Xu opened the show, which added 15 new looks 10 women’s and five men’s. At least for now, Fendi is overseeing both collections herself. The late Karl Lagerfeld was not involved in the planning of the China event so the combined men’s and women’s collections accurately reflected the new creative structure.

Not looking at the past but to the future is something we have very much learned from Karl. China, to me, is really a country which embraces the future a lot.

Contemporary China is plenty fertile ground for inspiration. It is the country where 5G is the norm, thanks to current political lightning rod, Huawei, and where ATMs allow cash withdrawal by facial recognition software, not that people here ever really use cash.

I think China is a land of opportunity, and is Fendy biggest market. We don’t see any limit. The only limit is how much we can do…We need more artisans in Italy able to make our products, and more people in China joining the brand, bringing their enthusiasm and youth helping us to connect the brand to the Chinese people.

With Shanghai to host two more shows from Chloé and Prada next week, both presenting new collections, it seems that is something on which the industry agrees.