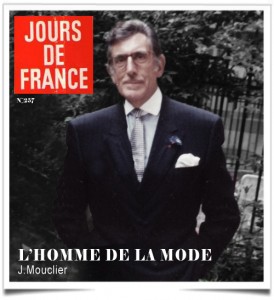 A few decade ago, a journalist of the French television, which was called at the time the ORTF, Leon Zitrone, the French Dan Raiser, called me for arranging a meeting.

Leon Zitrone was a very charismatic journlalist. A Friday morning, he arrived and said : Mr Mouclier, Mr Dassault would like write several pages on French fashion in his magazine « Jour de France ».

I was very surprised that Marcel Dassault knew me and was interested by me. « Do not be surprised, Mr. Dassault knows everything and he knows you very well. He calls you the man of the fashion industry.

Marcel Dassault belonged to those captains of the French industry like Francis Bouygues or Largardère. We used to call them « Sirs ». They belonged to those gentlemen who have partly disappeared today to leave place to rednecks and who have no more consideration for anything except themselves.

Several days later, a 4 pages on fashion were published in « Jour de France » and, if my memories do not fail, the magazine was issued at 4 million exemplares.