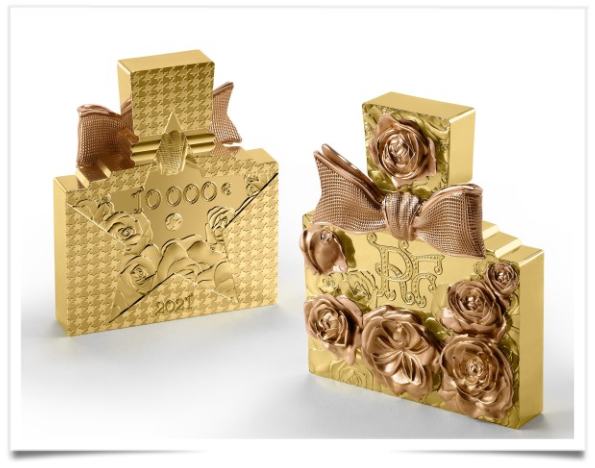 The Paris Mint, or Monnaie de Paris, worked with the house of Dior last year on a unique 4.4-pound gold coin featuring the shape of the first perfume bottle created by Christian Dior for his first fragrance, Miss Dior.
This is the first coin the mint has made weighing 4.4 pounds and the first one it has ever presented at auction. The coin’s pre-sale estimate runs between 200,000 euros and 300,000 euros. Some of the auction’s proceeds are to go the association Fleurs d’Exception de Pays de Grasse, which sets out to protect, promote and bring the southern French city’s crops of flowers to their full potential.
“It supports young farmers, fosters the transmission of traditional expertise, advocates for local heritage and works to safeguard the environment and biodiversity,” The Miss Dior coin will go under the block during a live auction at Sotheby’s Paris scheduled to take place on March 2 at 9 a.m. The sale is part of the auction house’s first Luxury Week of 2022, known as Re(LUX).