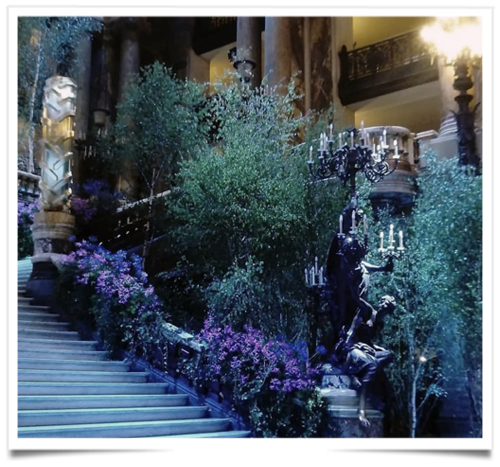 One of the most famous buildings in Paris, the Paris Opera, celebrated its 350th anniversary on Wednesday  and it went all out.

A flurry of glamorous guests including Meg Ryan, Maggie Gyllenhaal and Golshifteh Farahani mounted the central staircase of the Palais Garnier, surrounded with an installation of wild flowers by florist Eric Chauvin.

The audience took their seats under the venue’s stunning ceiling painted by Marc Chagall to enjoy a performance by Russian soprano Anna Netrebko, as part of the fund-raising gala supported by Schiaparelli and Rolex and, not by Chanel as we said few month ago. Shame on the people who said it was a fake news.

There was a certain frisson about spending the evening in such a famed landmark, known for being the setting of Gaston Leroux’s novel “The Phantom of the Opera.” In fact, we were the Phantom as we were not invited. So unfortunately we cannot tell you more about the performance.