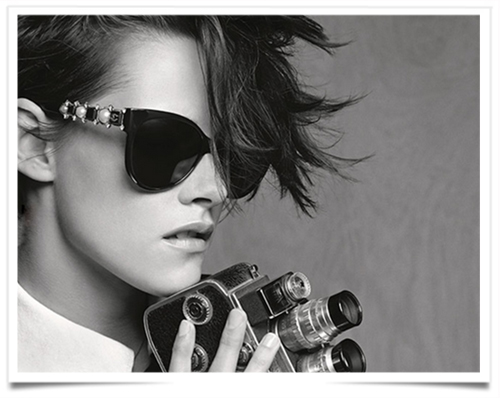 Chanel presents the Spring Summer 2015 Eyewear ad campaign starring Kristen Stewart and shot by Karl Lagerfeld. Look at the images from the ad campaign and the gallery with all the others for the house starring the actress.
The first time she posed for Karl Lagerfeld, she had an uncompromising expression and modelled with nonchalance the looks from the Chanel Métiers d’Art collection presented in Dallas in December 2013. In the campaign images, the actress wears cowboy jackets and boots, coats and fringed bags, full layered skirts and metallic tops with fur sleeves.
Recently she was tapped, alongside Vanessa Paradis and Alice Dellal, as the face of Chanel’s new handbags campaign. Karl has recruited her once again to be the Ambassador of the renowned maison. In the only image released as of now, the actress is portrayed with a bejewelled drop-framed glasses whilst looking through a magnificent vintage camera.