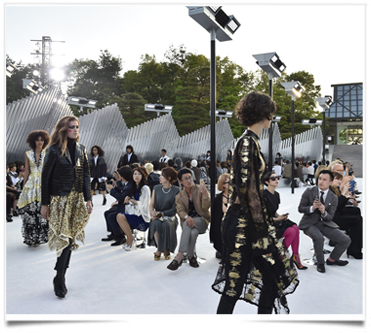 In an unprecedented move, Vuitton took over 15 of the street’s historic restaurants to host its guests. The evening before, it had booked three of the city’s temples, including the prestigious Sennyū-ji temple, which Emperor Akihito often visits and which had never before hosted a private event.

With such build-up, there was a risk that artistic director Nicolas Ghesquière’s clothes would be overshadowed by the production. He more than rose to the occasion, with a lineup that paid tribute to Japan’s rich traditions, while further mining the tough-girl aesthetic he has established since joining the brand in 2013.

Japanese actress Rila Fukushima, a longtime friend of the brand best known for her role in “The Wolverine,” opened the show in a belted jacket made from a patchwork of furs, including two leopard-print shoulder patches that popped against an oversized striped cotton shirt.