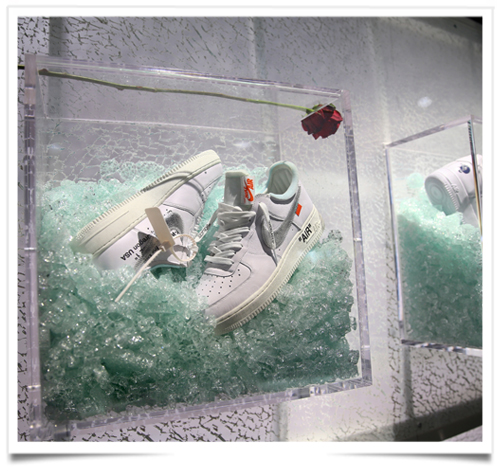 Wale, whose real name is Olubowale Victor Akintimehin, highlighted what a difference a year makes, and in 2016 Adidas seemed to own the spotlight at the shopping festival. This year, Virgil Abloh’s take on the Air Jordan 1s as part of his The Ten project with Nike won the top spot  last year Kanye West’s Yeezy 350 V2s were a top contender  and out of the 10 sneakers discussed, only one style came from Adidas, which was the Yeezy Boost 700 Wave Runner that’s yet to be released.

Nike dominated the ComplexCon show floor with a sizable booth that commemorated the 35th anniversary of the Air Force 1s. The space featured a center court speaking area, retail store and separate section where attendees could customize Air Force 1s. Other activations included Master Classes from brand partners including Abloh and Errolson Hugh, a surprise performance from Rich the Kid, and a talk between Kobe Bryant and Kendrick Lamar.

Adidas, a few aisles away, had its own mega buildout with an area dedicated to a collaboration with N.E.R.D., special-edition styles of the EQT and NMD sneakers (both of which sold out), its Bodega-themed product with Pusha T, and shoe archives, among other elements.

Puma took a similar approach by celebrating the 50th anniversary of the The Suede and allowing customers to meet with ambassadors such as Emory Jones of Roc Nation and influencer Yes Julz to get advice about their music or sneaker designs. According to Allison Giorgio, vice president of marketing for Puma North America, the goal was to not only sell sneakers, but make people a part of the brand.

We’re in a new era where sneakers are beyond trainers to walk in, they also mean huge cultural value.