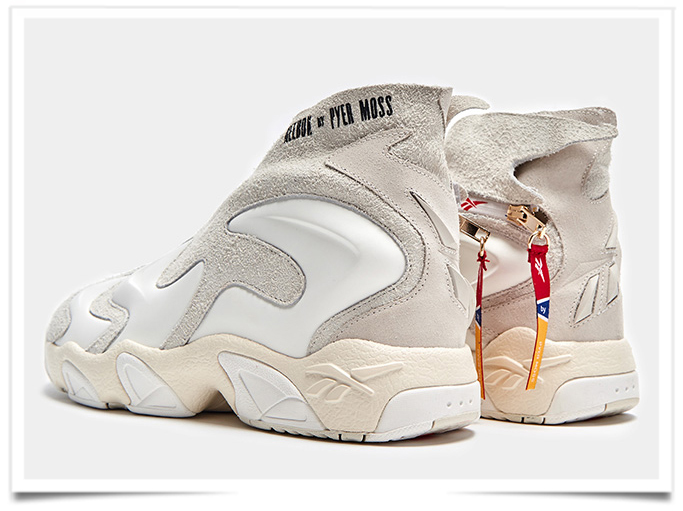 Following its debut in pink, the Reebok Experiment 3 by Pyer Moss will be returning in a white colorway.  Pyer Moss was founded in 2013 by Kerby Jean-Raymond. Jean-Raymond describes the brand as an “art project” or “a timely social experiment” at times. Pyer Moss aims to use its voice and platform to challenge social narratives and evoke dialogue.

Pyer Moss continues to redefine itself every season with collections and runways that combine storytelling, activism, debate, theatre and social commentary; all while using collaboration with artists and brands as a medium to further the dialogue around seasonal themes.

Called the Triple White, the latest model in the series features a beige-colored suede upper accented with pure white rubber accents and set atop a white and sand-colored sole. The style will retail for $250 on PyerMoss.com, Reebok.com and select retailers worldwide on June 29 at 10 a.m. EST.

Along with the sneaker drop, Pyer Moss will premiere the third installment of the “Imma Ball Anyway” film series which aims to tell stories of players who have not only overcome adversity while pursuing the career of basketball, but have also made an impact building cultural awareness beyond the courts. The latest film features Derrick Gordon, a former starter for the University of Massachusetts men’s basketball team who became the first openly gay player in Division I men’s college basketball.

In 2018, Reebok by Pyer Moss earned FN’s Collaboration of the Year award, in part because every style sold out within minutes. But as senior director of menswear buying at Ssense, Federico Barassi, previously explained to FN, it’s more than just aesthetics that has made the collaboration such a wild success.

“Pyer Moss has a way of interpreting current events, politics and causes he is passionate about and translating them into his collections in a meaningful and personal way.