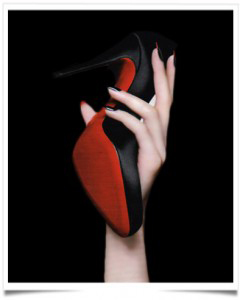 Christian Louboutin’s preliminary venture into the beauty arena a crimson lacquer called Rouge Louboutin that boasts a black pointed cap eight inches tall (the same height as the heel on the Ballerina Ultima, a shoe he designed in collaboration with David Lynch for his exhibition aptly titled Fetish). The blood-red polish is dangerously sexy—similar to one of Louboutin’s stilettos.

Seeing as the iconic red sole was developed in 1992 after the designer ripped a bottle of scarlet nail polish from his assistant’s desk on a whim and painted the bottom of a prototype, it seems only appropriate that his launch into the already-saturated world of cosmetics would begin in much the same way. Never one to blend in, his extensive range of 30 additional shades—comprising three color families, all with caps clocking in at seven inches tall, dubbed The Pops (vivid cobalts, pinks, and greens), The Noirs (vampy hues), and The Nudes (varying tones of ivory and chocolate that pair well with his capsule collection of shoes of the same name)—will be sold not at the beauty counter, but alongside his towering heels. The weighty glass flacon comes with a price tag that also exceeds traditional expectations: $50. (But compared to a $700 pair of pumps, it’s almost a bargain.) And come September, a line of Loubs that pay homage to the manicure will arrive on the shelves.