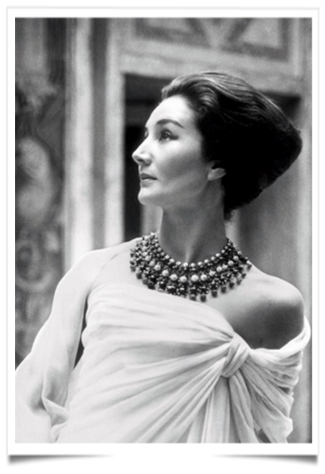 Jacqueline, comtesse de Ribes is a French aristocrat, designer, fashion icon, businesswoman, producer, and philanthropist. She has been a member of the International Best Dressed List since 1962.

The Washington Post in 1984, describing this energetic aristocrat with a Nefertiti profile. She herself has a more lofty description of her look: “Elegance, the art of being astonishing without creating astonishment.”

Her creations have been positively received with fashion journalists Hebe Dorsey of the International Herald Tribune and John Fairchild of Women’s Wear Daily singing her praises. Following health problems in 1995, de Ribes was forced to dissolve her company.

On 14 July 2010, the French President, decorated her as a Chevalier of the Légion d’honneur at the Elysée Palace.

From November 19, 2015 – February 21, 2016, the Costume Institute at the Metropolitan Museum in New York City will feature “The Art of Style”, an exhibition featuring items from de Ribes’s wardrobe. The thematic show will feature about sixty ensembles of haute couture and ready-to-wear primarily from her personal archive, dating from 1959 to the present. Also included will be her creations for fancy-dress balls, as well as numerous photographs and ephemera, recounting the story of how her interest in fashion developed over decades, from childhood “dress-up” to the epitome of international style.