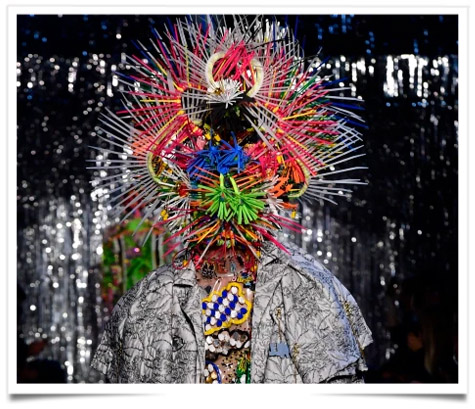 The designer From the flat country, I mean from Belgium for uneducated people,  Tom Van Der Borght won the Première Vision Grand Prize at the 35th edition of the Hyères International Festival of Fashion and Photography, which wrapped on Sunday, winning over a jury headed by designer Jonathan Anderson, founder of JW Anderson and creative director of Loewe.

In a break with its recent tradition of rewarding graduates fresh out of school, finealy. The Hyères jury selected a designer who is already established almost a retired fashion designer, It’s always better than Didier Grumler’s choices for his nights in Toulon. Van Der Borght started his fashion education at the age of 30 and established his label in 2013 after graduating from the Stedelijke Academie voor Schone Kunsten Sint-Niklaas, a fashion school located between Antwerp and his home base of Ghent.

Faces were obscured by masks covered in transparent sequins or spiky protrusions, and one model  wearing a dress embroidered with slogans including “I’m not a monster”  was carried down the catwalk by two attendants wearing colored masks in Van Der Borght’s likeness.