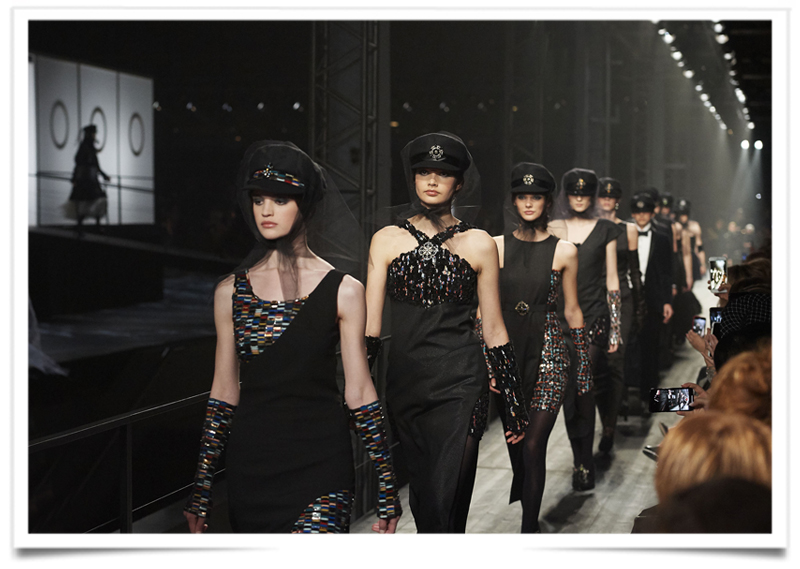 This is how Chanel last presented a fashion show in the Russian capital in 2009, then, its Métiers d’art Paris-Moscou collection and its traveling photo exhibition “Little Black Jacket” in Moscow in 2012.
But fashion show in Moscow on Thursday night, parading his Paris-Hamburg Art Crafts collection in a vast industrial space for Chanel. The factory touch of our preferred powdery  dandy.

The event drew a large part of the Russian elite – all dressed in tweeds, black and white and double Cs that drank in an imposing set reminiscent of a shipyard, with light effects, waving the ground with waves.

The show was set at Pavilion 69, part of the vast trade show and amusement park .Its famous attractions include a gilded fountain spewing water from sheaves of wheat a symbol of Chanel and the Worker and Kolkhoz Woman sculpture of two giant igures with a sickle and a hammer raised.

On Friday, Chanel invited 200 students from a variety of Russian fashion schools to view the Paris-Hamburg collection up close, and to hear a master class delivered by Bruno Pavlovsky, the brand’s president of fashion, who spoke about a business model hinged on the creative dialogue between Lagerfeld’s studio and Chanel’s ateliers.