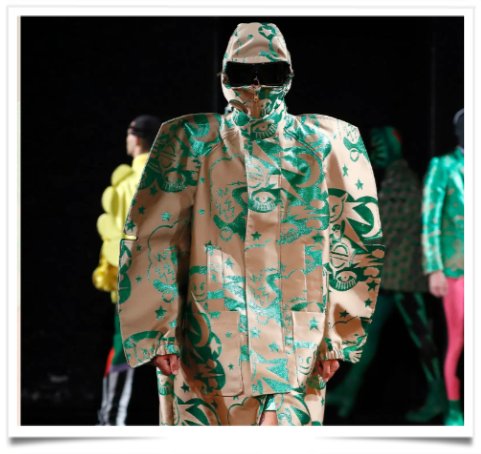 It was a show of his greatest hits. The Théâtre de la Madeleine was the place to see Walter Van Beirendonck’s fine tailoring, madcap prints, and sportswear elements for spring 2023.

A host of black ghost-like forms first appeared on the dark stage. As one by one, these dress fell off, revealing Beirendonck’s models.

It had wing-like sleeves and a gold color. Over a cotton shirt with ruffled sleeves and black suit pants, a black suit jacket was transformed into a vest. The necks were embellished with chunky sun charms, in reality a “fraise” that my neighbor calls neck jewel, which was at the beginning of the 16th century adopted in most of Europe it is the ancestor of all the collars, ruffles, ties, and collars that abound during the following centuries.

It’s part two, and the colors have run riot. It was the sportier part, but through Van Beirendonck’s eyes. An example is the gold vest with round motifs on top of a tracksuit decorated with swirls of green, pink, red and green. It was designed with today’s chaotic world in mind.

He said he wanted to make it more theatrical, to tell a story. All his fears and hopes were poured in, along with a hefty dose of beauty and fun. (Think sun, gold, and wings.)