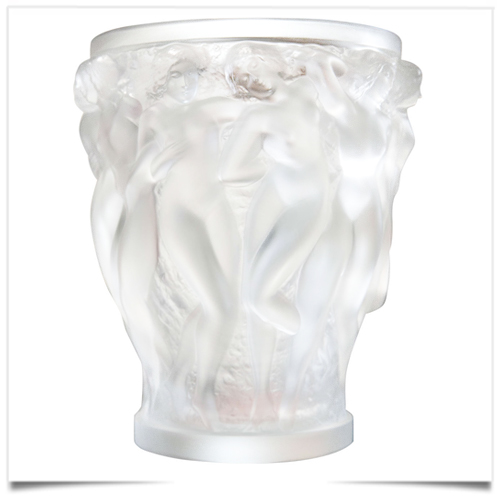 Suzanne Lalique is the daughter of René Lalique and Alice Ledru, born out of wedlock in 1892, she grew up under the benevolent gaze of her father and grandfather, the sculptor Auguste Ledru. From these friends of youth, we can remember names like Paul Morand or Jean Giraudoux. Discreet, Suzanne is nevertheless a precious help to her father who regularly solicits her. In the 1910s, she began drawing powder and candy boxes for her father. She uses her talent in other fields such as screens, wallpaper or fabric motifs, but also decorations for the Sèvre factory.

We know that Suzanne Lalique has worked on many projects that will be carried out under the signature of René Lalique. In the 1920s, she participated in the creation of various decorative crystal objects such as vases and cups. These works truly bring the Maison Lalique into the Art Deco era.

After her marriage to photographer Paul Burty-Haviland in 1917, Suzanne worked for William Haviland, who entrusted her with the creation of service decorations in Limoges porcelain, notably for the 1925 Exhibition of Industrial and Modern Decorative Arts in Paris. It was a real success and Suzanne then continued to create models for the company until the 1930s.