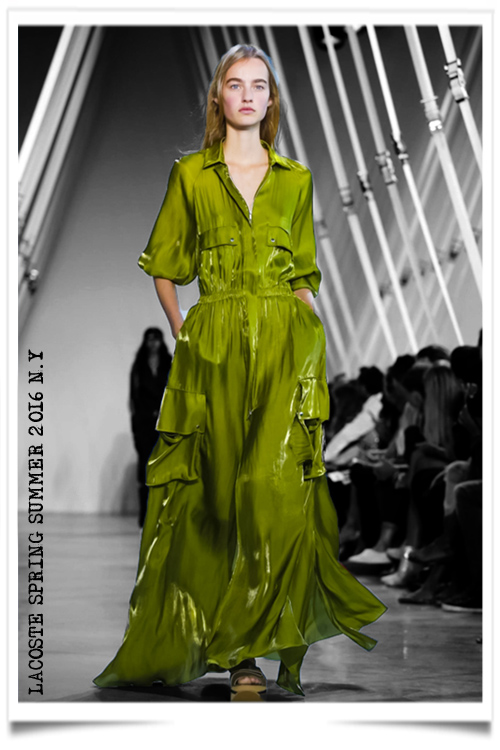 “It’s all about the Olympics,” said a smiling Felipe Oliveira Baptista backstage after his Spring/Summer 2016 show. “We are dressing the Olympic team next year,” he added, referring to the Summer Olympics in Rio where Lacoste will outfit the French team.

So the show on Saturday morning was something of a dress rehearsal for the designer. An upbeat sneak peek for the audience as to the direction Oliveira Baptista will be taking his future French team designs. And if what showed up on the runway is any indication, the Frenchies are going to be some of the most stylish athletes on the track.

The designer used national flags for inspiration and wrapped his work up in bright and bold graphic color blocking that got the patriotic blood flowing. Flowing too were a number of the silhouettes cut in asymmetrical nylon poncho or tent tops, designed to echo the look of a winning athlete who has wrapped themselves up in their national flag. Even when the references to banners were more abstract, such as a colorful confetti pattern, the collection still felt festive.

Interestingly, Oliveira Baptista balanced out these more vibrant offerings with pieces that got their starting point in the world of aviation. Winners from these design alternatives included a khaki jumpsuit dress in parachute silk that was elevated to a new level thanks to its iridescent treatment and a cropped bright red bomber jacket worn with matching graphic pants by model of the moment Mica Arganaraz.

If there was one caveat to this show it was the return of the strappy styling on outerwear worn almost like capes down the backs of some of the models. It did work in terms of this season’s overall concept, but it’s been seen a number of times before on the Lacoste catwalk.

However, if we are giving out metals for great sports meets sophistication styles then Lacoste clearly gets the gold.