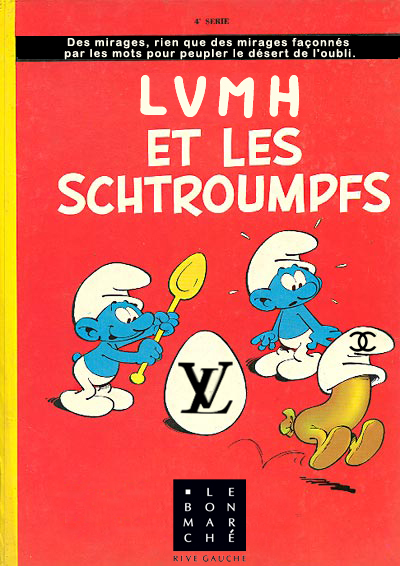 It hopes that humor can serve to energize the local shopping scene, Le Bon Marché is filling the store with Belgium-themed merchandise starting Aug. 29, with an emphasis on the country’s cartoon tradition.

The Smurfs, Marsupilami and Gaston Lagaffe are among characters decorating the selling space as well as merchandise throughout the tony, Paris Left Bank department store and its neighboring food hall, La Grande Épicerie de Paris and even spilling out into the street, with stands selling beer and fries. I’d have preferred Balthazar Picsou.!!!

Retailers have been struggling to draw shoppers into stores even before the coronavirus crisis hit  it’s hard to compete with the convenience of online purchases turning to events and temporary, exclusive offers to drum up consumer interest. The store called on comedian Stéphane De Groodt to take part in the Belgium theme, resulting in hoodies, T-shirts and pouches with word play in French. A box of matches, for example, which are called “allumettes” in French, is stamped “allumeuses,” which means “teasers.” The theme runs through Oct. 18.

Le Bon Marché and the Grand Épicerie are part of the selective retailing department of LVMH Moët Hennessy Louis Vuitton, which has been hit by the drop in tourism due to the COVID-19 pandemic. The division, which also includes Sephora and travel retailer DFS, reported first-half revenues of 4.84 billion euros, down 33 percent on an organic basis from the previous year.