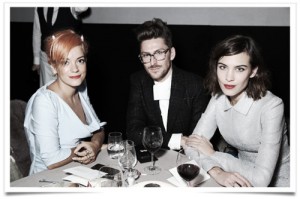 The 2014 edition of the British Fashion Awards 2014 delivered its verdict Monday night in London at the London Coliseum, bringing together an audience of international stars.

The award for the best women designer was given to Erdem Moralioglu whose is Canadian. She has a Turkish father and a British mother. One of his most famous clients is Kate Middleton.

The price introduced in 2013 for Best International Designer of the Year went to Nicolas Ghesquière (Louis Vuitton), which was competing with Hedi Slimane at Saint Laurent and Raf Simons for Christian Dior. Louis Vuitton also won the award for the most creative campaign.

Among the celebrities present, the biggest supermodels and designers, but also actors, as Emma Watson, who received the award from the British style, and Charlotte Gainsbourg who presented the trophy to Nicolas Ghesquière.