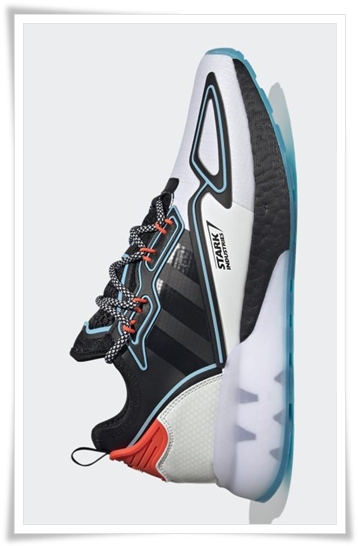 Adidas just dropped a new sneaker that’s perfect for fans of Marvel Comics. The German sportswear giant has partnered with Marvel to give its ZX 2K Boost shoe a new look by taking inspiration from the iconic comic book character Iron Man and his fictional company Stark Industries.

The look of the Marvel x Adidas ZX 2K Boost “Stark Industries” is executed with a black-based textile upper that’s paired with white panels at the forefoot and heel counter. Adding to the style is the text “Stark Industries” on the lateral side, an orange heel tab, and a full-length Boost midsole. According to the shoe’s product description, glow-in-the-dark details appear on the upper’s overlays and on the outsole reminiscent of Iron Man’s armored suit while the tongue is designed in the shape of his mask. In addition, the sneaker comes packaged with a special box printed with various Marvel comic book characters.

The Marvel x Adidas ZX 2K Boost “Stark Industries” collab is available now at Adidas.com with sizes ranging from a men’s 5 all the way up to a men’s 12. The shoe comes with a $150 price tag.