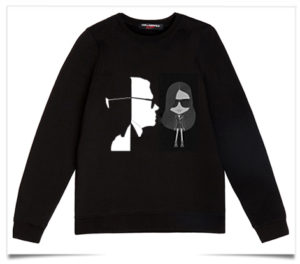 The Karl Lagerfeld brand has partnered with Los Angeles-based e-tailer Revolve.com for the launch of its clothing capsule designed in collaboration with model-of-the-moment Kaia Gerber.

The Karl Lagerfeld x Kaia line will hit karl.com and Revolve.com on Aug. 30 for a period of two weeks before rolling out to a network of premium retailers internationally, including Selfridges, Excelsior, Breuninger and La Rinascente.

The launch will be accompanied by three events, kicking off with a party at the Revolve Social Club in Los Angeles on Aug. 30, with singer Charlotte Lawrence scheduled to provide the entertainment. The space is also to host an experiential pop-up shop dedicated to the capsule from Sept. 1. Up to 70 percent of revenues at Revolve are driven by influencers. It works with a network of global content creators, and is on track to surpass $1 billion in sales in 2018.

On Sept. 12, Gerber is to host a consumer event at the Karl Lagerfeld flagship at at 420 West Broadway in New York. Fans will have the opportunity to win a meet-and-greet with the model through Karl Lagerfeld’s social media channels. The program will culminate in Paris on Oct. 2, during Paris Fashion Week, where Karl Lagerfeld and Gerber will cohost a by-invitation event.