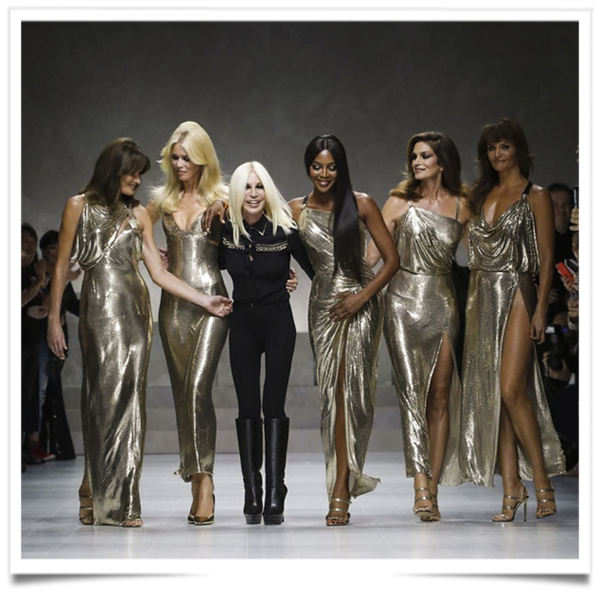 Helen David of Harrods said her must-have was “Gucci everything,” while Mario Grauso of Holt Renfrew summed up many of the retailers’ feelings about the Versace show, Donatella’s tribute to Gianni on the 20-year anniversary of his death: “Donatella has dominated the entire week with her tribute collection and reunion of the most iconic models.” Sadly, Naomi Campbell, Cindy Crawford, Carla Bruni, Helena Christensen, and Claudia Schiffer reunited one time only for the 20th anniversary of Gianni Versace’s death.

Ken Downing of Neiman Marcus called the city a treasure trove of ideas. “I feel so good about Milan. There is so much creativity coming off the runways right now in terms of collections  but also the music. It was a pleasure of a fashion week.”

Fausto Puglisi was the first to throw us all for a loop with his Baroque ballerina theme quite frankly the polar opposite of the badass mafia boss he drew inspiration from in February. The designer, known for his gilded, sexy divas adorned with ancient Mediterranean coins and religious symbols, showed his woman also has a soft side tulle tutus, satin ballet slippers, and traditional Italian linen and lace typical of a Sicilian grandmother’s dowry dominated the awe-struck runway.

Etro Spring/Summer 2018 was detailed from neck to toe in a collection that conjured images of the ancient Silk Road, its queens and maharajas. Hand embroidered patterns, crystal jewels, and accents on silk scarves and silk brocades and jacquards made for one of the most luxurious collections this week.

Moschino Gigi Hadid dressed up as a bouquet of flowers, Anna Cleveland throwing silk flower petals into the crowd.

Multibrand showrooms and small presentation formats are valuable resources for discovering brands and important as potential differentiators and future business.

A visit to the Gucci showroom felt like a glimpse inside Alessandro Michele’s fantastic imagination. Prada was full of wearable works of art, and we especially loved the graphic handbags and intricately embellished tailored vests and jackets.