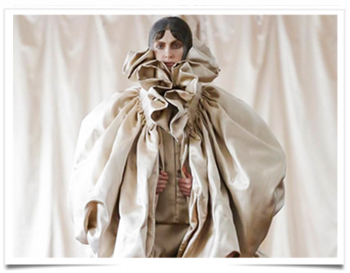 The official guest of the Federation of Ready-To-Wear, Corrie Nielsen, who has been presenting her shows for the last six years in London, presented a collection this year in Paris. She is one of the first to start the Paris Fashion Week with a well thought and relevant collection revealing a much more personal and innovant trend.

The collection, entitled ” Cradle of Humankind “, draws its inspiration from the great literature of the late nineteenth century with Bram Stoker’s Dracula as well as in 1992 film adaptation of the novel by the Director Francis Ford Coppola with Gary Oldman, Winona Rider and Keanu Reeves in the roles of the love triangle drama . The influences of Corrie Nielsen for this collection are also historical with references related to Jeanne d’Arc.

The crowd of photographers attending to the show was very impressive and representative of the expectation and the excitement of this newcomer so praised across the Channel. Long before the parade began, a myriad of cameramen and reporters rushed backstage to interview the designer.

As the show began and soon after the first models paraded, we were quickly snapped up into this mystical world staged through silky materials and know-how that could be found in the work of lines and details .

Corrie offered a complete wardrobe ranging from skirt suits, pantsuits, day and evening dress and winter coat. A luxuous and original ready-to -wear for which buyers will have no trouble to succumb .

During this first fashion show in Paris we could feel the true DNA of each of the model of this designer. This time it was very different from the previous collections where we could find influences from Vivienne Westwood where she started and worked during 6 years before starting her own label in 2010.

While the last three models paraded, a small incident occured that run much ink . The troll of the long sequin dress, collared in strawberry, clings to the heel of the model. In an elegant and admirable gesture, a guest of the ” front row ” helped the model to extract the troll from the heel and, thus, releasing captured in this image by an audience of photographers delighted to have the original photo. The public welcomed this gesture and applauded.

The parade ended with a strapless wedding dress with silk pleated shoulder and oversized basque, followed by a domino cape, which gave the illusion of an armor, while exposing a subtle interplay of transparencies that revealed the body of the woman so dear to Corrie Nielsen .

I suddenly started dreaming and rediscovering a lost feeling that I had when I was a student and I was already admiring the John Galliano’s, McQueen’s and Westwood’s fashion shows. During a moment I felt like if I was over the moon, transported in this universe that I thought I will never see again.

Maybe I ‘m not very objective, but it was surely one of the shows of this Paris Fashion week I had not to miss. Now I can not wait to see the next one although I will have to wait with the same enthusiasm and in the same way I am expecting the next season of The Walking Dead …. !