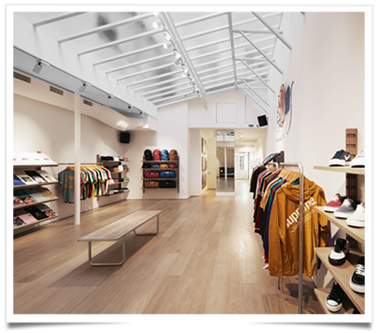 Supreme has opened a shop in Paris. This time it’s official, the New-York based brand inaugurated its store at 20 rue Barbette in the Marais district. Located close to the ‘Rue Vieille du Temple’, the exterior is very basic: a black front, with two windows and no signs or labels.

In April 1994, Supreme opened its doors on Lafayette Street in downtown Manhattan and became the home of New York City skate culture. At its core was the gang of rebellious young New York skaters and artists who became the store’s staff, crew and customers.

Supreme grew to be the embodiment of the downtown culture, playing an integral part in its constant regeneration. Skaters, punks, hip-hop heads – the young counter culture at large – all gravitated towards Supreme.

While it grew into a downtown institution, Supreme established itself as a brand known for its quality, style and authenticity.

Over its eighteen year history, Supreme has worked with some of our generation’s most groundbreaking designers, artists, photographers and musicians – all who have helped continue to define its unique identity and attitude. This is the brand’s second shop in Europe following the first in London, and its tenth in the world.