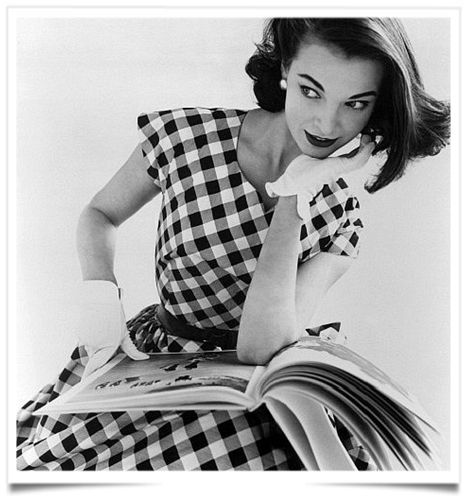 Women’s fashion of the 1950s reflected a complicated mix of conservatism and glamor. Women who had lived through the privations of the Great Depression and World War II were now able to afford new styles and embraced them all, from the elegance of grand, sweeping skirts to shorts and trousers.

Despite the mature, conservative look of major designers, a new feeling for casual attire crept onto the scene, as women increasingly began to wear pants, shorts, sportswear, and shoulder-revealing sundresses.

Christian Dior introduced the New Look in 1947. With its tight cinched waist, billowing skirt, and pronounced bust line, the New Look recalled historic styles of the mid-19th century and set the tone for the next decade.

Huge skirts needed the support of petticoats made of nylon mesh. Hoops, or crinoline cages, a relic of the 1850s, were brought back. Sometimes, petticoats showed below the skirt hem, trimmed in pretty colors. The New Look offered a new opulence and a new look at femininity.