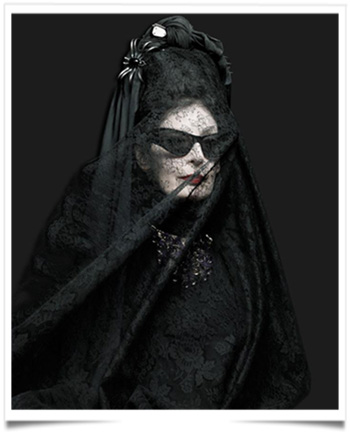 Diane Pernet is a world-renowned fashion critic and journalist based in Paris. Previously a photographer and fashion designer, she now acts as documentary filmmaker, talent scout and fashion blogger.  She was one of the earliest fashion journalists to embrace the power of the internet, first through a column in the online editions of “Elle”, “Vogue” and, then, on her own site, A SHADED VIEW ON FASHION, which since its inception in 2005 has become a ‘must-read’ in fashion and creative industry circles.

Pernet was recognised in 2008 for her pioneering spirit in digital media when she was chosen as one of three influential global bloggers to take part in a panel celebrating a seminal fashion exhibition at New York’s venerated Metropolitan Museum of Art.

As one of the most recognisable faces in fashion, she has also been captured on the other side of the movie camera through cameo appearances in Robert Altman’s film, ‘Prêt-à-Porter’ and in Roman Polanski’s ‘The Ninth Gate’.  While contributing to some of the most highly-acclaimed fashion magazines and pioneering online media, Pernet launched her blog in 2008.